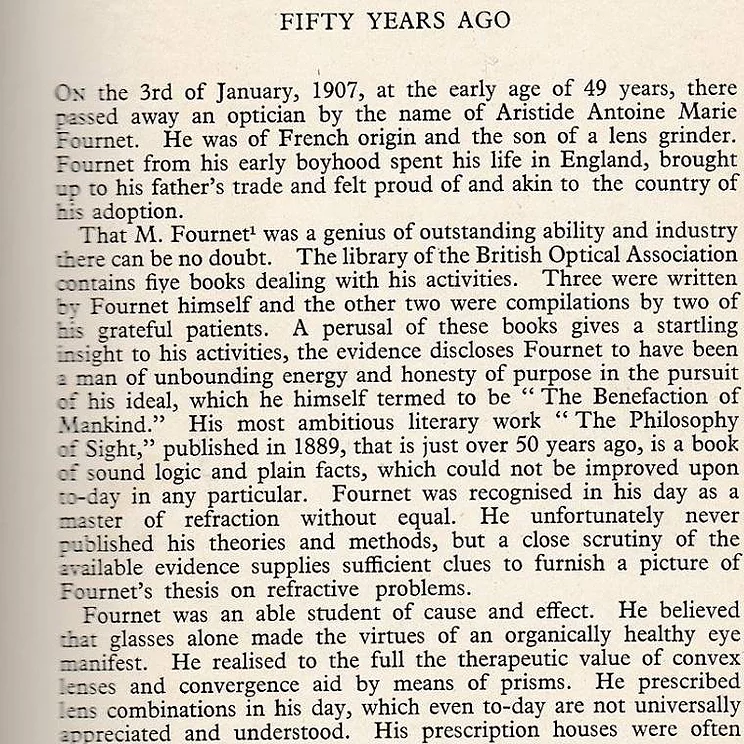 On the 3rd of January, 1907,  at the early age of 49 years, there passed away an optician by the name of Aristide Antoine Marie Fournet. He was of French origin and the son of a lens grinder. Fournet from his early boyhood spent his life in England, brought up to his father's trade and felt proud of the akin to the country of his adoption.

That M. Fournet 1  was a genius of outstanding ability and industry there can be no doubt. The library of the British Optical Association contains five books dealing with his activities. Three were written by Fournet himself and the other two were compilations by two of his grateful patients. A perusal of these books give starling insight into his activities, the evidence discloses Fournet to have been a man of unbounding energy and honesty of purpose in the pursuit of his ideal, which he himself termed to be " The benefaction of Mankind." His most ambitious literary work " The Philosophy of Sight," published in 1889, that is just over 50 years ago (When this article was written, see image below) is a book of sound logic and plain facts, which could not be improved upon today in any particular. Fournet was recognised in his day as a master of refraction without equal. He unfortunately never published his theories and methods, but close scrutiny of the available evidence supplies sufficient clues to furnish a picture of Fournet's thesis on refractive problems.

Fournet was an able student of cause and effect. He believed that glasses alone made the virtues of an organically healthy eye manifest. He realised to the full the therapeutic value of convex lenses and convergence aid by means of prisms.  He prescribed lens combinations in his day, which even today are not universally appreciated and understood. His prescriptions houses were often...

THE MEMORY OF FOURNET
August

The Obliteration of Fournet's Path

Myopization - The Crime against humanity

Myopization - "The Crime against humanity", the tragedy which has no parallel, even on the global scale, the case which emergently deserves to be addressed to the tribunals such as the EU Court of Justice, these are some of the words by which dr Kasia Viikari, PhD describes the situation in the eye care practice.